My two months in Singapore concluded with a super quick trip to Taipei just to high five William. But wait, there was more! 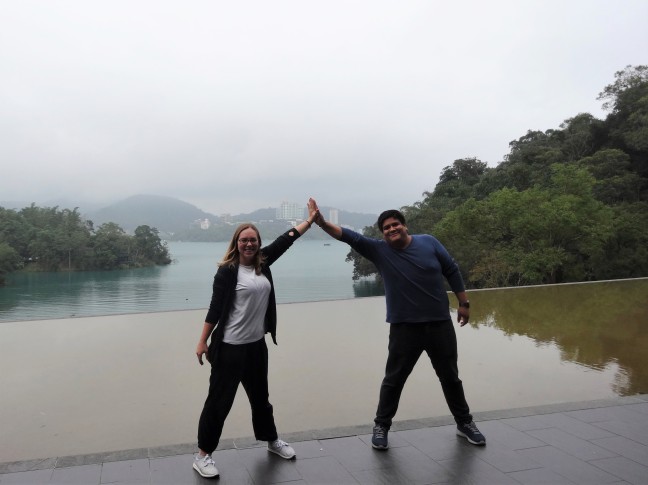 It’s safe to say, there were a lot of feelings for my former host country involved, but nostalgia was the dominant one. Which is great, because I really, really wasn’t sure about returning to this place where I spent a year during my studies. Not because Taiwan isn’t great, it is.

Look here and here and here, if you don’t believe me. The people are great, too, insanely friendly. And don’t get me started on the food! The food! But during that time abroad, I was involved in an abusive relationship and I was afraid some piece of this past would surface again, once I was among the familiar scenery.

But guess what? It didn’t! So I was free to roam the city with my friends without being weighed down by that emotional baggage. And boy, have I missed it.

After William, his lovely girlfriend Ivy and Ivy’s mom picked me up at the airport on Saturday, we went straight to Din Tai Fung to have dinner.

I ordered the spicy peanut noodles and the pickled cucumbers, as always, but there was sooo much more food…  The steamed mini buns for dessert were just the cherry on top.  For the record, it was absolutely clear to me that I was in for a three day eating tour through Taipei before I even boarded the plane. I went willingly. That evening we just had a quiet night in and some Orion beer, like we did in Okinawa.

The next day, we went shopping at the new Costco near Fu Jen University, where I got to sample some of the “world’s best” whisky. It’s good, but not quite my taste. I like them smoky and peaty.

William and I also sampled the wines. Since we were already at it. We also passed by my old supermarket.

And, more importantly, by Teppanyaki. 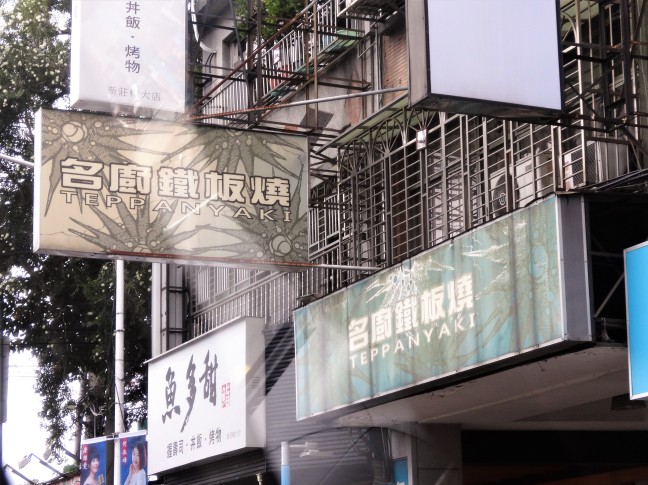 Now this was one of my favorite restaurants in the school’s neighborhood. It’s some of the most delicious food I have ever had and yet so simple.

Yes, all of that is garlic.

King Oyster mushrooms, with a black pepper and butter sauce.

And these two look like they’re enjoying it, too.

Then we dropped Ivy’s mom off at the train station, because she had to go back to Hualien.

That night, a few people came out to Balle Balle, my favorite Indian place in Taipei, to have dinner with me. They could barely fit us in, but it was a blast. It was so good to catch up with everyone and I was glad to be among these lovely people again and see how far they have come. 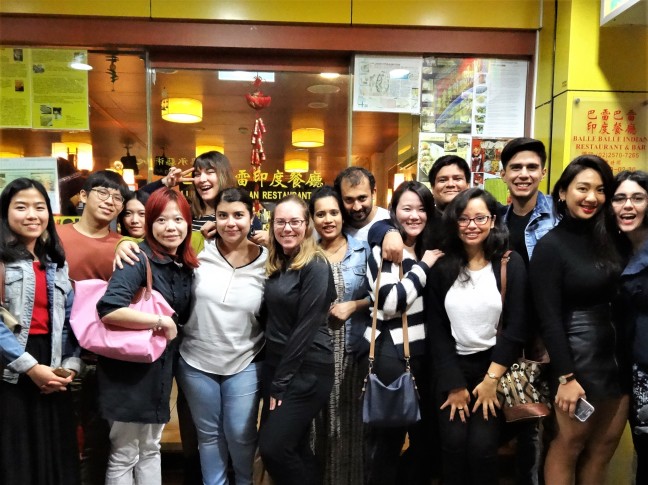 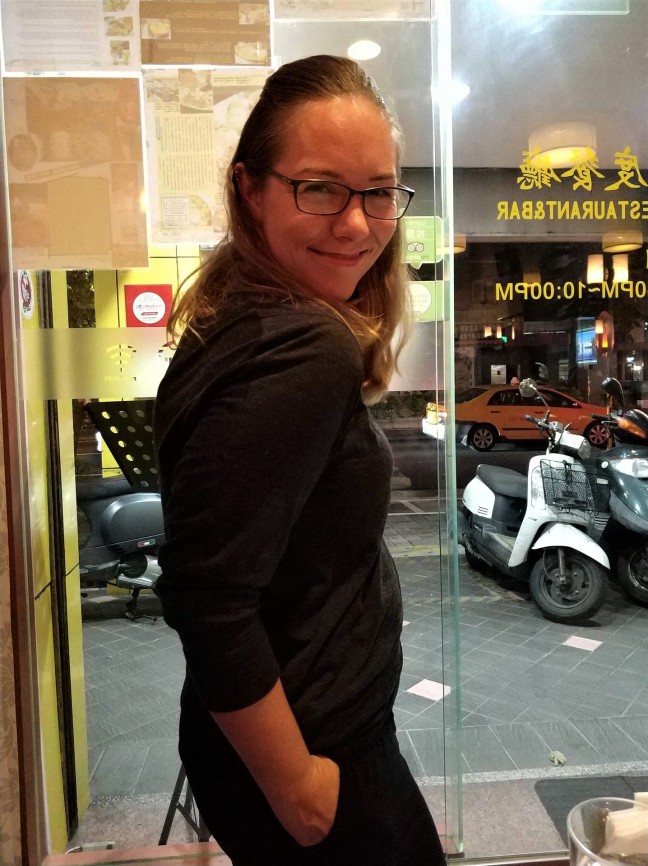 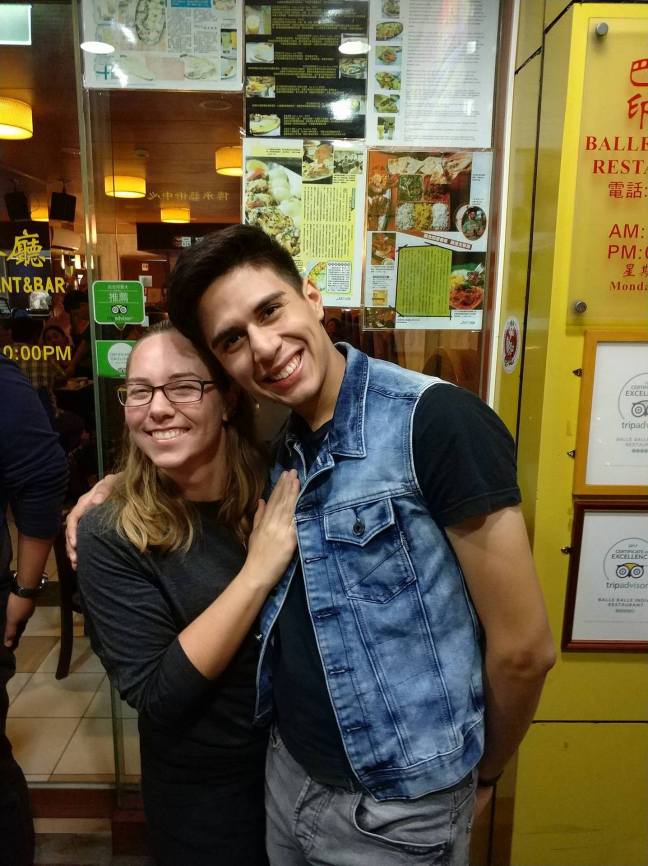 Luis and I were feelin’ ourselves.

And Sujay and Lenita have since had their baby boy. Congratulations!!!

The next day, we decided to go to a famous scenic area where I had never been before: Sun Moon Lake. So we took some more corny pictures. 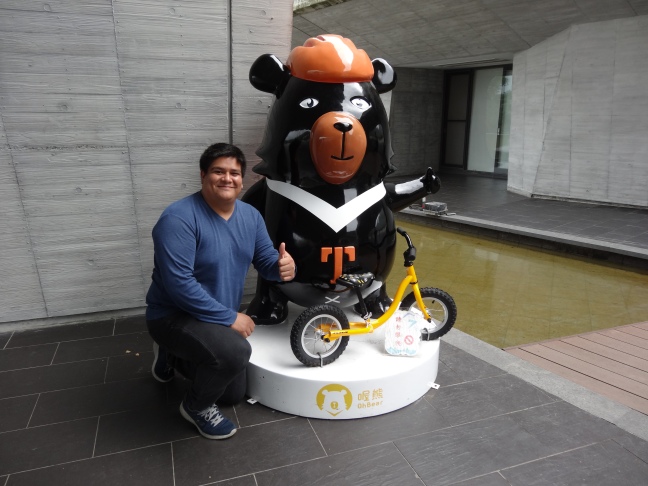 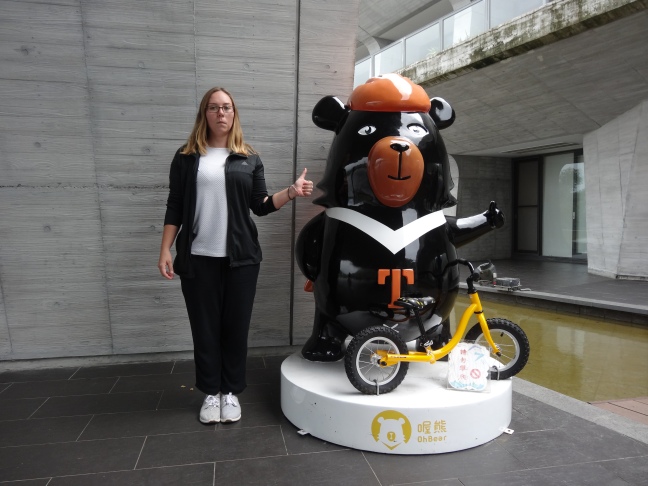 But we also went biking! 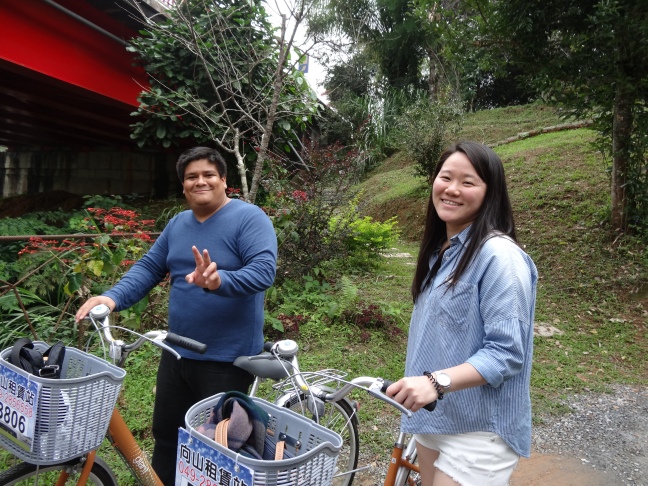 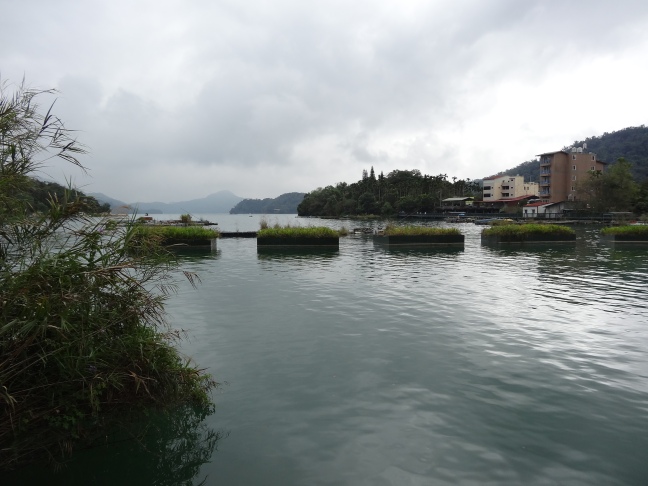 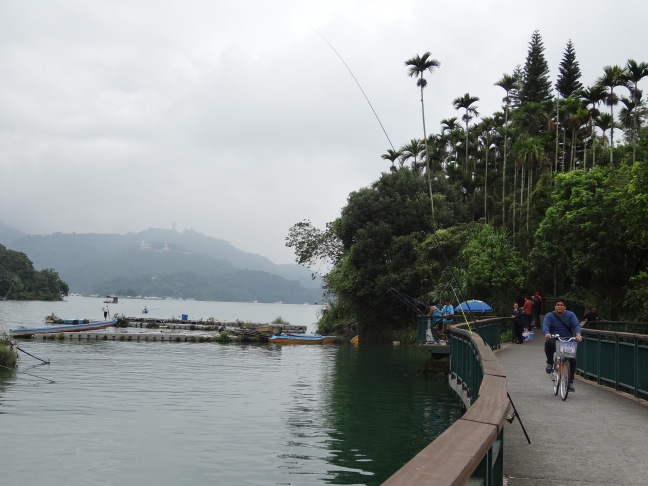 We didn’t go all the way around, but we went up one really steep climb. Here’s the photo from the top! 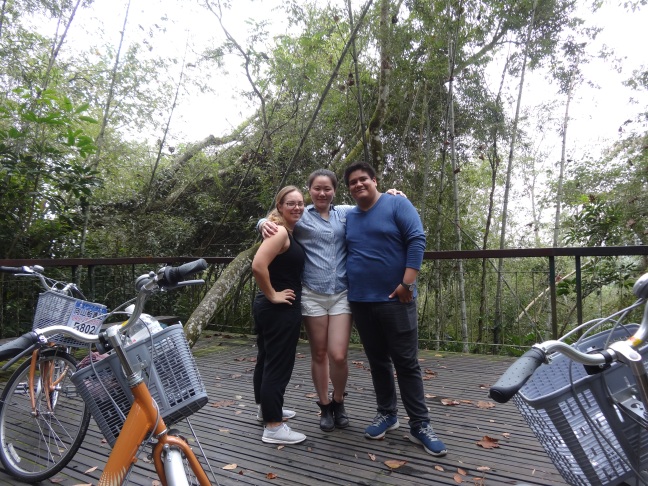 Felicity had given me some delicious crispy egg roll cookies with black sesame the night before, so we munched on these. I have never tasted any egg rolls that good, so they must be a special brand. Here’s how you make them, if you’re interested. Black sesame was also on my shopping list, it’s not easy to find outside of Taiwan and yet so delicious.

I also had a proper tea egg at 7/11. They are the most delicious things and although I have learned how to make them, I had been craving them forever.

That evening we had a few beers at a bar and I said goodbye to pretty much everyone except William and Ivy.

The next day, William too me to another place I had never been before:  Jiufen Old Street. It’s famous for its food and popular with Japanese Tourists, because it inspired the movie “Spirited Away”. However, the weather looked like this:

I was told, the rain is part of the program and when we walked by the first shop, it was clear that it must be, because we got ourselves properly outfitted in no time. 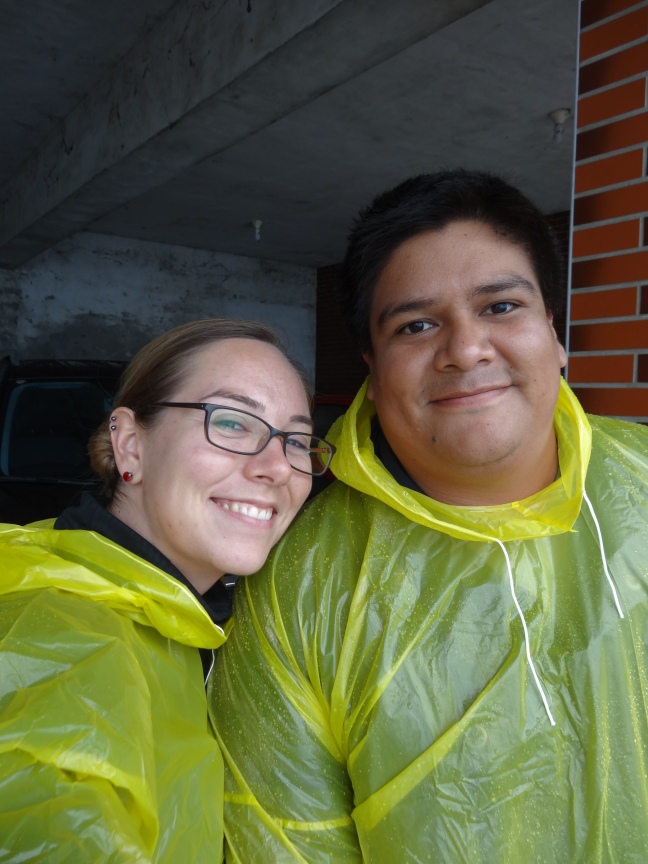 Then we were off to the street of plenty.  It looks wonderfully old-fashioned. 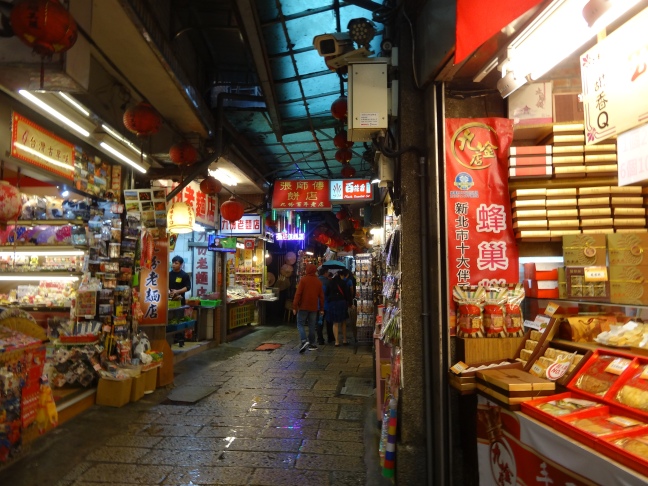 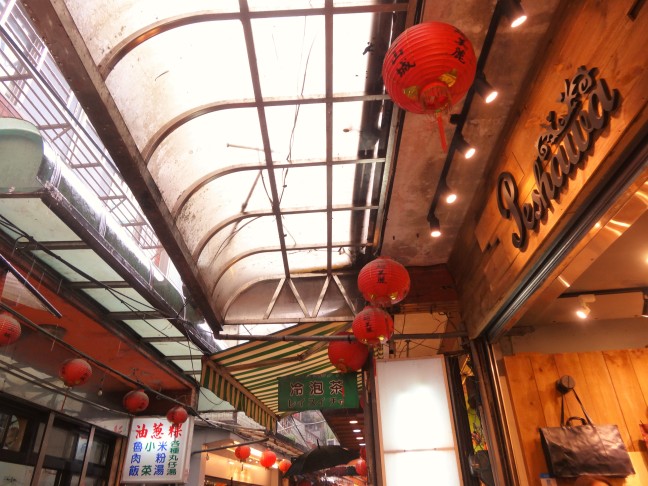 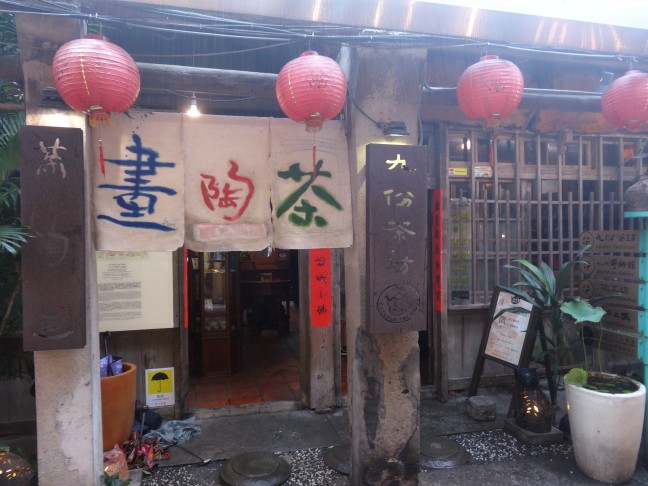 I love these red lanterns everywhere.

There was so. much. food.  Peanut ice cream rolls 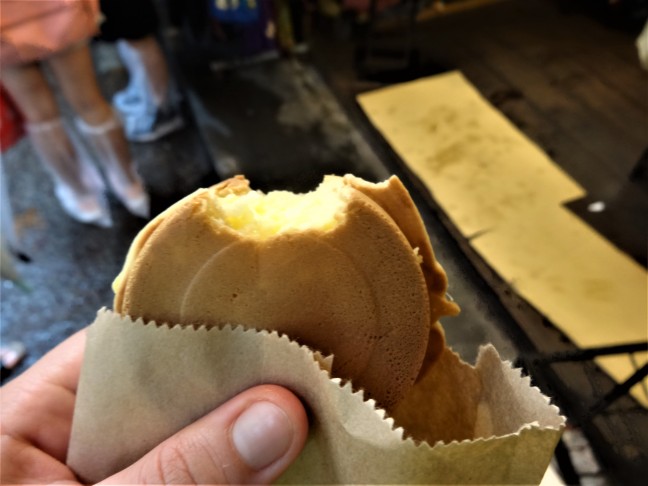 And we had a marble soda!

Of course, I bought a bunch of goodies to bring home and I am sipping ginger tea as I type. I also bought two scarves, a pair of shoes and a stone pendant. 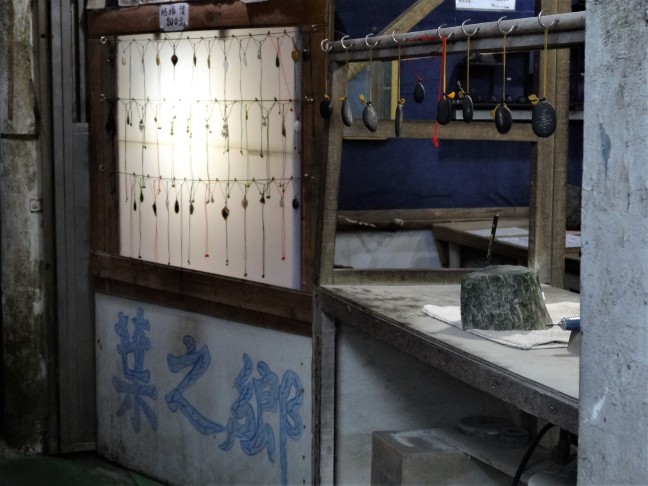 The end of the street, where you are supposed to enjoy a beautiful view, looked like this: 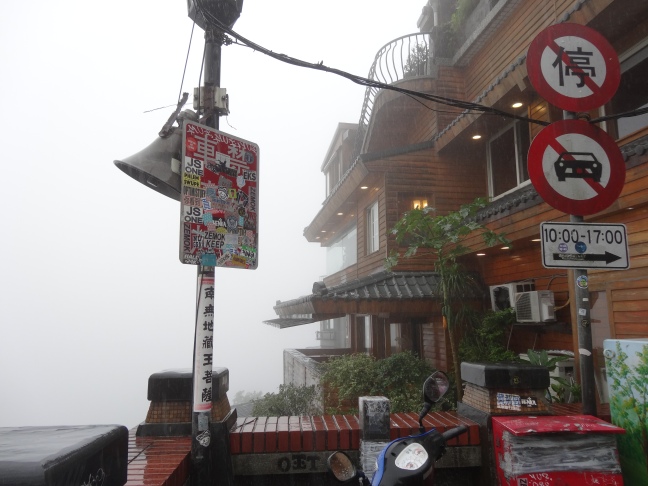 When we got back to the car, I turned out we were a little soaked. 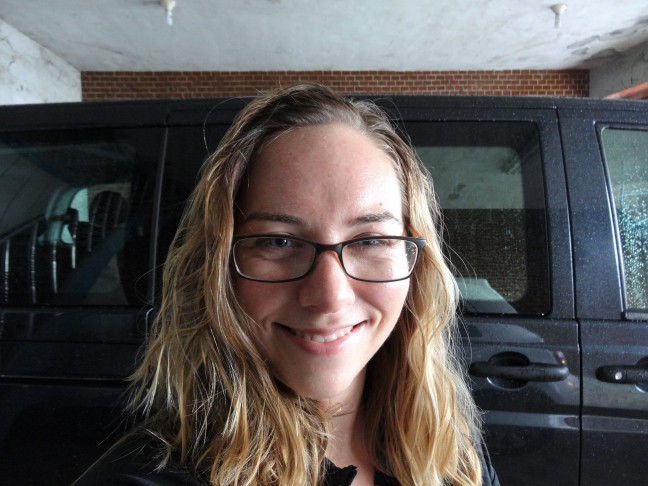 But that lead to this gem of a picture.

And, since we were feeling a little hungry again after eating street food for three hours, we went to my favorite hot pot place for an all you can eat buffet.

That made us somewhat late, so we rushed back to grab all my stuff, William lent me an additional suitcase for all the things I bought (So many things! Where did they even come from??) and I packed and changed in the back of the car on the way to the airport.

It absolutely felt like an action movie, especially when we hit a red light and I jumped out of the back and got into the front in just my socks, because I left my shoes in the front seat. We sent a few live-coverage voice messages of this episode for our friend Anny, who used to be William’s roommate while we were all in Taiwan.

And we just made it on time!

Thanks again, William and Ivy for hosting me, and everyone else for showing up and hugging me hello and goodbye. I miss you guys already!

People rarely believe me, when I call myself an introvert. I seem to "function" well.

Friends and enemies have called me a free spirit. They are probably right.